No name would have been more desirable. With the Packman 200, Opteq Robotics has developed a self-driving solution for material flow which makes its way quickly and directly through the aisles to reach its destination, just like the popular arcade game from the 1980s. While making the wrong turn soon means game over in the classic Japanese arcade game when the main yellow character becomes the victim of voracious ghosts, detours also signify a loss for the Dutch company’s new solution, i.e. through lost time in rapid material flow. The Packman 200 features KOLLMORGEN AKM synchronous servo motors as drives, based on a new version with specially tuned winding for 48 volts. 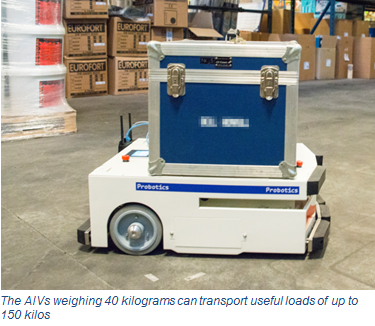 The mobile robot systems are connected via WiFi with a fleet management system which in turn communicates with a higher-level ERP system and receives the travel jobs from there so that the Packman 200 does not lose its bearings. The network is so finely interconnected based on the Industry 4.0 concept that the ANT (Autonomous Navigation Tool) always passes the job onto the correct Packman. The correct one depends for instance on the distance to the job destination, the capacity of the relevant battery, as well as on the relevant model is capable in the first place of transporting the freight weight required. “Our self-driving systems have a modular structure, because of which there will be different categories of weight”, says Henk Kiela, Managing Director at Probotics. The current model is able to transport loads of up to 150 kilograms with an own operating weight of 40 kilos, and with availability of more than six hours. The mobile assistant then needs to return to the charging station.

Flexibly linking production islands:
The Dutch firm from the small town of Haps, just south of Nijmegen, believes that the machines will be used much more in production companies as well as in clinics rather than in large logistics centers. The aim of the Packman 200 is to automate the transport routes here which were previously covered by employees in a time-consuming process. Henk Kiela mentions the different configuration options for linking production islands with no fixed routes as examples here. “The special feature with our solution is that we do not need magnetic sections for the routes. On the contrary, we are able to take flexible routes as a result of the level of freedom in the programming. This makes integration into modifiable production facilities so easy and so attractive based on cost aspects”, highlights the firm’s owner, who also still works as Professor of Mechatronics and Robotics at the Fontys University of Applied Sciences, Eindhoven.

The fact that the mobile units are linked beyond the classic automation pyramid and thereby increase efficiency in material flow makes them a powerful representative for Industry 4.0. Another particularly attractive feature of autonomous intelligent vehicles (AIVs) is their simple structure with few components. A look at the interior essentially reveals a laser sensor for ascertaining distances, the battery pack, a powerful controller featuring Motion Control along with two low voltage DC servo motors from KOLLMORGEN’s AKM series in frame size 3 as wheel drives. 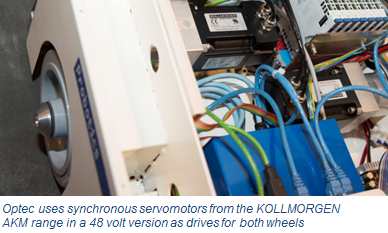 48 volt drives with reserves:
The AKM-31’s regular nominal power rating is 1.3 kW with its 400 V winding. With the adjustment to 48 volts the compact units provide 300 watt of power with planetary gears installed directly. As supplier of fully-integrated automation systems, SigmaControl has used the S-Dias range from Sigmatek together with the KOLLMORGEN motors. “This way we have matched the perfect couple, implementing the control movements with different speeds on the wheels and also taking responsibility for the process and motion control”, says Frank ten Velde, Account Manager for SigmaControl, exclusive distributor of SIGMATEK Netherlands. The DC 061 axis module provides virtually 300W of nominal power and is designed to control a synchronous servo motor with up to 6A of continuous current at 48V DC. The breakaway torques required when starting up the mobile transport robots can be easily controlled since the module is able to provide a peak current of up to 15A at short notice. “This allows us to avoid constantly oversizing the drive technology, thereby saving space and helping us to extend coverage, since the batteries don’t need to supply as much electrical power”, explains Frank ten Velde further. Together with Dynamic Drives the company has already been working for more than 20 years as a certified partner in Belgium and the Netherlands to KOLLMORGEN. 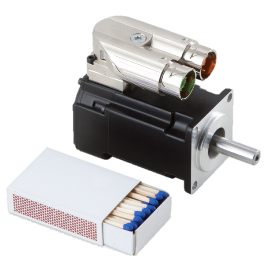 A very generous design also provides more space for further versions of the Packman. “We are reducing the variety of versions available. Our customers benefit from this through lower purchase costs as well as with subsequent provisioning”, explains ten Velde. The power reserve provides purely benefits for the system integrator in this case. “There’s barely any difference in price whether we provide a controller for four or six amps. Yet the solution space becomes significantly larger.” This aspect makes it possible for instance to implement applications with the 48 volt AKM servomotors in combination with the SIGMATEK-Motion-Control system which require highly dynamic positioning. These types of applications can regularly be found in packaging technology, e.g. for labeling. 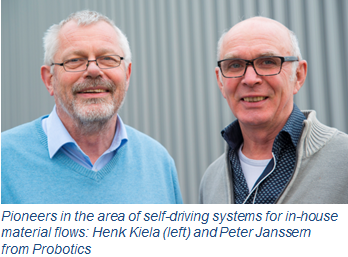 The drive and control technology can be adapted easily:
Kollmorgen Opteq EN Aside from the pure functionality and power of the drive technology, spiritual father of the Packman 200 Henk Kiela also appreciates the ease related to configuration and programming of the drive and control solution from KOLLMORGEN and SIGMATEK. “This gives us the option, for instance, of easily adapting the Packman 200 to different ground conditions. If I have a rough surface for example, then I can optimize the drive technology in such a way that it suits pneumatic tires perfectly.”

Since the Dutch innovation center’s core knowledge and expertise can be found in system development and integration, the professor of mechatronics and his development team rely on partners for implementation “who provide technology that also works in reality in the way that we imagine at the start of a project”. The success of the collaboration between KOLLMORGEN and SigmaControl is clearly illustrated in the brief implementation phase for the prototype for the Packman 200 of just three months. “I know how to put drives together myself, but it takes a lot of time. I can save that time by purchasing a fully-connected solution with ready-made standard functions, and then focusing instead on the object-based programming for our own robot system.”

More room for the really essential tasks:
The professor of mechatronics and robotics is convinced that the systems such as the Packman 200 enable much more efficient configurations for in-house flow of goods. “We expect savings of at least 15 percent.” Given this potential he says that he expects the mobile robots to be implemented on a broad basis within the next ten years. He claims that the aim of this is not to save headcount, but rather to provide relief to staff from unproductive in-house transportation tasks. For him this also includes tasks in clinics as well as any potential usage in the production industry. The central issue with this is why nurses should waste the little time they already have moving hospital waste, bed clothes and beverages? The efficiency savings thereby create more room for spending time with patients.

For more information about this article from Opteq Robotics click here.

Other articles from Opteq Robotics.