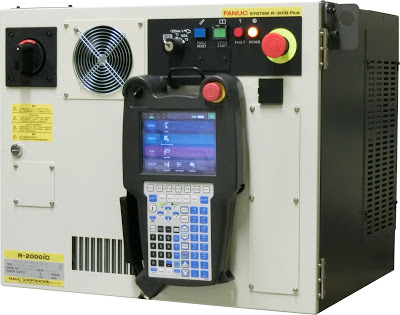 The new R-30iB Plus controller features a new iPendant with an enhanced screen resolution and processing capability. The user interface, iHMI, has an icon-based screen which provides a familiar and easy-to-use experience with intuitive guides for setup and programming. It also includes tutorials from the main home page which has a design common to FANUC CNCs, enabling easier use of robots. With the help of the programming guide, even first-time robot users can create a program for a simple handling task and execute it in just 30 minutes. Easier usage also facilitates system setup and maintenance to improve efficiency.

For those customers more comfortable with the current interface, the new iPendant can easily revert to the previous version.

Processing performance for both hardware and software has been improved in the R-30iB Plus, and the signal processing cycle has been shortened. Compared to past controllers, signal output timing has been enhanced, expanding possible applications to systems which require a high level of positioning precision, such as laser applications.

The vision function of R-30iB Plus has a new camera interface which increases four times the speed for transmitting images from the camera, together with a simplified cable configuration. With improvements in the user interface, the setup of the vision system can be handled much more efficiently.

Overall, R-30iB Plus contributes to the easier use of robots and automation in the manufacturing industry.

FANUC invites its global customers to the annual Open House event in Japan to demonstrate new robotic, CNC and factory automation products. Customers are provided the opportunity to attend technical presentations to learn about the products from FANUC’s technical experts.

About FANUC:
FANUC Corporation is the worldwide leading manufacturer in factory automation for CNC control systems, robots and production machinery (ROBODRILL, ROBOCUT and ROBOSHOT). Since 1956, FANUC has been a pioneer in the development of computer numerical control equipment in the automation industry. With more than 252 offices worldwide and more than 6.500 employees, FANUC offers a vast network for sales, technical support, logistics and customer service.

FANUC embraces a culture of “Service First” which means that customer service is our highest priority. That commitment includes lifetime maintenance for all FANUC products for as long as our customers use them in production.

For more information about this article from FANUC Corporation click here.

Other articles from FANUC Corporation.