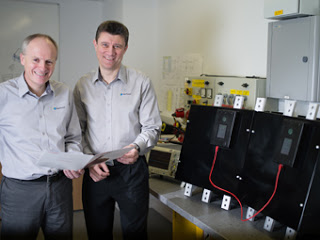 Fairford Electronics (UK) – British-based company Fairford Electronics is set to revolutionise the global soft starter market, predicted to be worth $1,672.4million by 2020, thanks to its new patented technology called PLUSS which can be used in literally thousands of applications around the world.

By specialising exclusively in the single area of soft starters, Fairford has been able to lead the market through innovative design and engineering excellence and is now in discussion with some of the world’s largest automation companies on how to best exploit this leading technology.

The Devon-based firm, which in 1982 became the first company in the world to design and produce a fully digital three phase Soft Starter with automatic Energy Optimising, is delighted to now have another global first to celebrate.

Soft starting is used to control the initial voltage to motors for a jerk free start in all industrial applications such as cement, oil & gas, chemicals & petrochemicals, power generation, paper & pulp, and mining to ensure there is no large jump in energy requirement or mechanical stress.

In industry alone, 75% of all energy is used by electric motors in applications such as HVAC, chillers and freezers, mixers and pumps, so this technology will enable massive energy reductions globally.

The patented technology can also be applied to thyristor based power controllers such as solid state relays and applications ranging from electrical heating to the control dc link voltages in motor drives so the global market for this new technology will be extremely large.

Mark Shepherd, managing director at Fairford Electronics, says: “Following the Brexit vote, the UK government is placing even more emphasis on UK manufacturing, especially by supporting innovative ideas, so we are delighted to have gained a worldwide patent for this new technology and to have another global first for a British company.

“We are known internationally for our innovative technology and solutions are always at the core of activities and what ensures the company to lead the soft starter global market.

“Larger power soft starters are more expensive to manufacture compared to smaller versions because of a lack of economies of scale on production, approvals and testing.

“A PLUSS control system means a spare soft starter can be included on critical applications, ready to take over in the event of a fault on another soft starter. Thermal load sharing between several soft starters working in parallel on one application also boosts reliability and operating lifetime of the control system.”

Gary Stephens, lead engineer at Fairford Electronics, explains how the new PLUSS technology works: “The Fairford PLUSS system simply requires soft starters to be joined with a communications cable. The PLUSS software on each soft starter then synchronises each starter to operate alternately on each cycle of the input power.

Fairford Electronics are now seeking to exploit this technology in markets around the world through its existing global distribution network and will also be working with a range of major industrial automation specialists to fully exploit the potential of PLUSS.

For more information about this article from Fairford Electronics click here.

Other articles from Fairford Electronics.