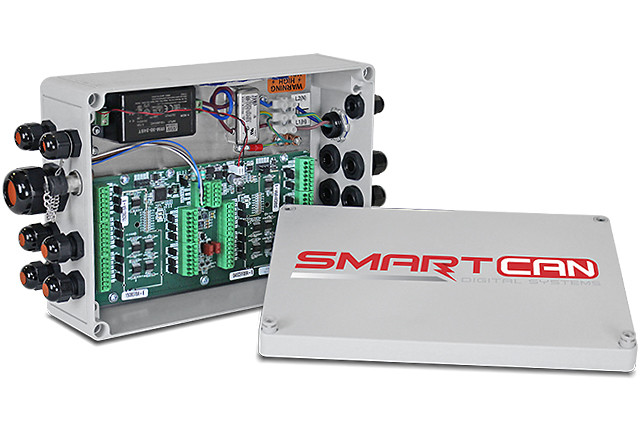 SmartCan is housed in a compact, rugged weatherproof IP66 / NEMA 4 enclosure and doesn’t require cumbersome external power supplies, in most applications. The indicator software permits a maximum of 32 load cells that could be used in any combination with SmartCan (the homerun cable length, power supply, and sample rate may limit the number of load cells used, in some instances). There are seven different SmartCan boxes available for a wide range of configurations.

SmartCan may be used in a variety of different applications with new and existing truck scales, railroad scales, floor scales, bench scales, and batching systems.

Cardinal Scale’s Fail-Safe feature with SmartCan allows the system to compensate for a failed load cell by mirroring the estimated value of the remaining cells to offset the failed cell. The Fail-Safe feature uses an algorithm to calculate an estimated value from the data of the remaining cells and creates a virtual load cell to replace the data from the down cell.

Troubleshoot through the Indicator:

Cardinal Scale’s iSite is a cloud-based remote monitoring system for load cells connected to the SmartCan conversion box. Text and/or e-mail auto alerts can be sent for errors and warning events. Through secure online dealer access, scale diagnostics may be looked up remotely to quickly identify problems before they interrupt weighing operations.

Authorized Cardinal Scale dealers may plug a NEST toolkit directly into the SmartCan box for additional onsite diagnostics. NEST allows you to view the diagnostics in your choice of millivolts or pounds. There are three display modes: signals display, minimum-maximum display, and signals minus zero reference display.

The SmartCan system has onboard diagnostics that can be used by a technician to alert them of critical errors due to setup issues and hardware problems.

The following diagnostics data is available and will be shown to the technician on the main weight screen of the 225D or 825D indicator:

For more information about this article from Cardinal Scale click here.

Other articles from Cardinal Scale.