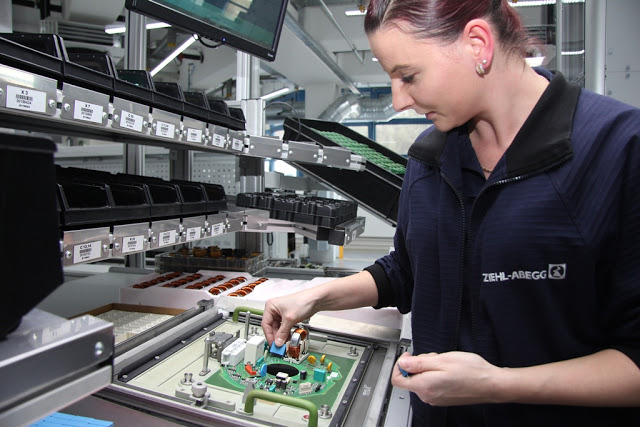 The fan and motor manufacturer Ziehl-Abegg posted growth of around 12 percent in the year 2017. Turnover rose from 484 million to 540 million euros according to the provisional figures for the financial year just past. The number of employees reached a new record high of 3900. The company traditionally publishes no information on profits.

The growth in sales was worldwide. "Our expectations have been significantly exceeded in Asia as well as in North and South America" stressed CEO Peter Fenkl. However, even countries where sales had been halved due to political upheavals a few years ago have recovered well, posting increases in the double-digit percentage range. The company boss referred in particular to the Ukraine and Russia as example of this development. The new Ziehl-Abegg company in Dubai is proving to be a good starting point for business in the Middle East. Even supposedly crisis-hit countries like Iran are reporting growth, especially in the elevator motor business.

Brexit, the controversial US President, elections in Russia, the formation of a government in Germany, discord in the EU, or conflicts in Africa as well as Asia – Fenkl explains the situation as being "like a colourful array of Swords of Damocles hanging over political and economic developments". Despite this, Ziehl-Abegg is starting the current year full of confidence, sustained by the positive order intake in the first weeks of 2018. "This year we will again be launching products that will set new records for energy efficiency, as well as investing in the global production and service network," adds the Chief Executive.

The growth in sales is being accompanied by an expansion of the workforce. A year ago, Ziehl-Abegg employed 3550 people worldwide, now that figure is 3900. The number in Hohenlohe increased from 2000 to 2200. “This rapid growth not only poses a challenge for us in terms of production but also in the integration of new employees”, explains Fenkl, adding: “Our suppliers also need to be able to keep pace with the rapid growth in sales." Ziehl-Abegg has also improved and expanded its production capabilities. In the year just past, the company invested a record 43 million Euros.

Whilst ventilation technology (fans) and drive technology (elevators, medical technology) each both posted a double-digit increase in sales, the automotive division is lagging behind expectations. “The city bus manufacturers in Western Europe are very reluctant to switch over to electric drives” says Fenkl. However, he fully expects to see a significant increase in the political pressure and the desire of urban dwellers for clean and quiet buses. "When that happens, we will already have developed the tried and tested solution." The latest generation of the ZAWheel city bus drive incorporates the wishes of the bus manufacturers as well as the experiences of the bus operators with this technology. The Chief Executive is pleased to report that the level of interest shown at the world's largest omnibus fair, Busworld in Belgium last October, was very positive.

For more information about this article from ZIEHL-ABEGG click here.

Other articles from ZIEHL-ABEGG.