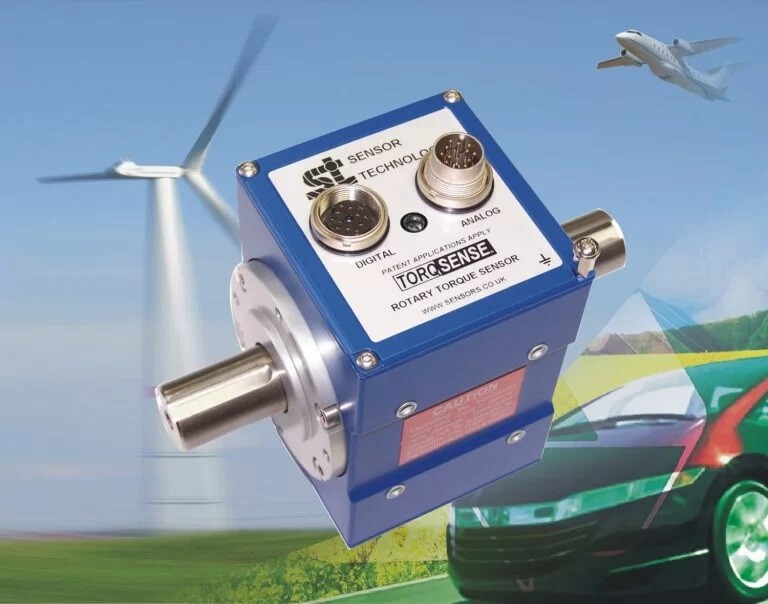 Sensor Technology (United Kingdom) - The evolution of the UK’s power distribution network holds the key to harnessing the benefits of variable power sources such as wind, tidal and solar farms, as well as numerous other distributed power technologies. But connecting these various sources to the network is not without its challenges, and is the subject of research at the University of Warwick, where a test rig has been built to identify the requirements of a suitable power electronics controller. At the heart of this rig and playing an important part in the research is a wireless torque measurement device from Sensor Technology.

Over the last 10 years, the UK’s electricity generation mix has changed substantially. Where coal fired power stations made up some 37% in 2008, that has fallen to less than 8% today. Our reliance on gas continues to be a concern: it made up around 40% of the fuel mix ten years ago, but still represents around 35% of our fuel mix today, with the government worried not only about longevity of supply, but also stability.

Nuclear power today represents around 15% of the UK’s energy mix, and while there is a commitment to building new plants, there have also been slips in the construction timetable and escalating budgets. Meanwhile, at the same time, the numbers of options for renewables have been increasing and the costs have been falling.

There is an attraction in moving away from the centralised power plant model for energy generation to one where smaller, renewable energy plants are constructed, using distribution networks either to connect to the transmission network or to supply local energy requirements directly. The range of these alternative power plants being constructed include wind farms, hydro-electric stations, solar farms, CHP and biomass combustion plants, as well as a host of other smaller generation technologies.

However, the surge in the number of distributed generation plants and the resulting increase in the numbers of connections to distribution networks does not come without problems, particularly when the variability of supply from the likes of wind and solar farms is considered. Unlike conventional centralised power stations, these renewables produce less stable supplies, of variable quality, so are difficult to connect to the grid.

The development of new controls that will enable renewable distributed generators to supply either local requirements or to be connected to the transmission line grid is the subject of a PhD project at the University of Warwick. Researcher Ruizhu Wu is studying the use of power electronic devices to increase the penetration level of distributed generation in distribution networks. Power electronic controllers are seen as one of the primary options to control the power flows and voltages that will enable new loads to be integrated into the distribution network, and so increase the density of distributed generation.

But there are still challenges to the widespread deployment of power electronic controllers in distribution networks. Ruizhu Wu’s work is focused on identifying the requirements of the necessary power electronic controller, and to do this he has built a test rig to simulate variable loads. Key to the research is a TorqSense wireless torque measurement transducer from Sensor Technology.

The rig is built around two induction machines which mimic the generator and load. The TorqSense transducer between the two is used to map the performance of the machines, enabling voltage and current to be linked with torque and so provide an accurate picture of the requirements of a controller.

The wireless TorqSense transducers operate using surface acoustic wave (SAW) principles, and offer significant advantages compared with strain gauges, magnetic torque sensors and optical devices that might be fitted conventionally. Each TorqSense sensor uses two tiny SAW devices made of ceramic piezoelectric material containing frequency resonating combs. These are glued onto the drive shaft at 90 degrees to one another. As the torque increases the combs expand or contract proportionally to the torque being applied. In effect the combs act similarly to strain gauges but measure changes in resonant frequency.

The adjacent RF pickup emits radio waves towards the SAWs, which are then reflected back. The change in frequency of the reflected waves identifies the current torque. This arrangement means there is no need to supply power to the SAWs, so the sensor is non-contact and wireless. The research is at a very early stage, with data only now beginning to be assessed. But power electronics is regarded as providing a real turning point evolution of distribution networks to enable the integration of a greater number and a wider range of distributed power sources.

For more information about this article from Sensor Technology click here.

Other articles from Sensor Technology.

Bar Code Identification with the Best Recommendations from AI