Weighing in on the green motoring debate By 2040, the UK’s target for all new cars manufactured is zero emissions. To achieve this target will require a significant scale up in domestic production of hybrid, plug in hybrid and battery electric vehicles, and consequently much higher volumes of lightweight components.

Last year there were 120,000 new UK registrations of all-electric cars. Unlike all new vehicle sales, which dropped by 5.7%, EV sales rose by 34% in a year, indicating that there will be significant new opportunities in the supply chain, notably the domestic injection moulding sector. Nigel Flowers, Managing Director of Sumitomo (SHI) Demag UK discusses why having a toehold in this lightweighting space will be good for UK automotive component suppliers.

As a result of the landmark Automotive Sector Deal released on 10th January 2018, both government and industry have committed to invest about a quarter of a billion pounds to develop and manufacture electric vehicles*. Currently only one per cent of total automotive production comprises electric vehicles and continued international competitiveness of the manufacturing base is dependent on the sector making the transformation to new ultra-low and zero emission technologies, outlines the ASD report.

According to the Society of Motor Manufacturers and Traders (SMMT), the UK is home to over 30 automotive manufacturers and has 18 of the world’s 20 biggest automotive suppliers located here. The council body now puts the average content of a British-built car sourced domestically at 41%, compared with 36% in 2011. Of all the components required for vehicle assembly, close to 80% could in theory be produced by UK suppliers, the SMMT suggests.

In addition to vehicle trim and bodywork, exhausts, radiators and cooling systems tend to be moulded and sourced from local suppliers in the UK. “There has been a definite trend among OEMs and vehicle makers to switch their procurement to domestic suppliers as it reduces supply chain risk and lead times,” comments Nigel. “From a quality and risk management perspective, it is safer to have your supplier close by.” The most sought after UK-produced items include plastic injection moulded components, trim interiors, vehicle upholstery, forgings and stampings.

Producing smaller, lighter vehicle components requires greater moulding precision, emphasises Nigel. “Every single component that’s engineered and sourced from a supplier and placed into a vehicle contributes to its overall mass so must be optimised,” he comments. “Because automotive plants are predominantly automated, assembly robots are not tolerant to variables. As a result quality of components is paramount, ensuring they function for the whole of their intended life.”

The injection moulding machine must be able to withstand higher stresses and speeds. Nigel explains: “When producing thinner components you are working with thinner wall thicknesses. Faster filling and higher pressures are required to drive molten plastic material into the moulds to prevent it freezing off between shots.”

Addressing recall risks:
Vehicle recalls add another layer of complexity, putting greater strain on the automotive supply chain, which is also being squeezed to produce components at ever more competitive costs. A new report by the global insurer Allianz** highlights that defective product or work is the major cause of recall claims, with automotive impacted most and accounting for over 70% of the recall losses analysed. These are influenced by complex engineering, reduced product testing times, outsourcing of R&D and increasing cost pressures, suggests the report.

In order to keep procurement, crash testing and approval costs lower, automotive parent companies, which tend to have multiple brands in their portfolio, frequently leverage product and technologies across vehicle models, for example a chassis. “The downside to this is if there’s a cross-model quality issue, the risks and recall volumes become higher,” says Nigel.

The level of precision required further strengthens the argument for switching from hydraulic to all-electric injection moulding machines, which many Tier 1 suppliers that mass produce automotive components are doing. “Defects are something that injection moulders cannot afford to be complacent about. All-electric machines, like the IntElect, enable moulders to run much closer to low weight limits, with greater precision and consequently fewer defects and lower scrap rates.”

Rising vehicle production, strong exports, and growing opportunities for local automotive supply chain specialists is creating significant commercial opportunities for Tier 1 suppliers. As testimony, between October 2016 and October 2017*** engine manufacturing in the UK rose by 14.7%. By 2020, UK sourcing is expected to increase from current levels of 41% to upwards of 50%, creating up to 28,000 new jobs in the supply chain. “Continued inward investment in component production and the production of new electric and hybrid vehicles will prove to be a major boost to the industry,” adds Nigel. 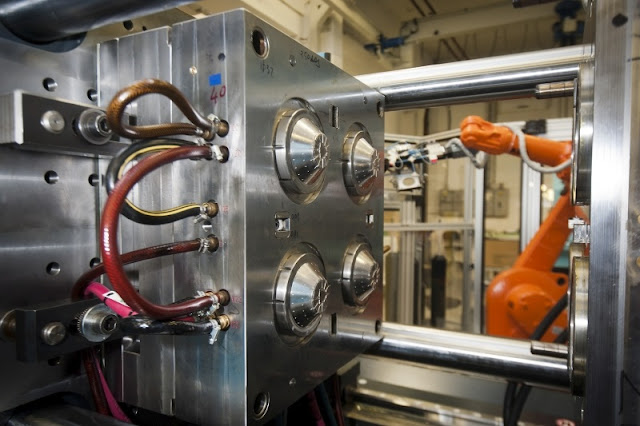 For more information about this article from Sumitomo click here.

Other articles from Sumitomo.