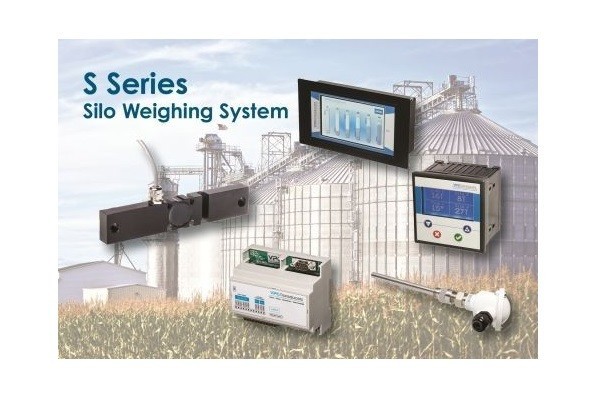 The VPG Transducers brand of Vishay Precision Group, Inc., global designers and manufacturers of standard and custom force, pressure, torque, load, tension and weight sensors, announced the introduction of its S Series Silo Weighing System. The S Series offers a cost effective solution to accurately measure the weight of a silo while providing the option for temperature measurement. Users can utilize these measurements (weight and temperature) to calculate an accurate fluid density, fluid mass, or actual volumetric level.

The new S Series offers three models of weight and temperature display controllers for panel mounting (ST1 and ST3) and remote monitoring (S-Box) applications. With this system, users have accurate visibility of both silo temperature and weight, which are often used to calculate the storage level of the silo, thereby preventing over-filled or empty storage drums, water tanks, and other vessels.

The S Series system supports weight and temperature readings across a broad range of industrial processes in the agriculture, water treatment, cement, and food & beverage industries. Weight is measured using VPG Transducers’ model 178 load cells, which are at the heart of the entire system, while temperature is measured using PT100 sensors (standard option) installed within the silo (supports up to two temperature measurements per silo).

Under the S-Box Silo Weighing System for remote monitoring, the setup allows many different measurements to be displayed on desktop browsers or portable devices. Using its embedded web server, the user friendly, multi-language (English, French, German, and Spanish) website interface is easy to use and allows the user to consult measurements from any computer connected on the same network. The S-Box comes standard with a powerful 32-bit x86 microprocessor and supports up to 24 silo weight measurements, 48 temperature measurements, as well as up to 4 relay interface casings (16 relay outputs per casing) and Ethernet IP connections.

The ST1 Silo Weighing System, also appropriate for panel mounting, has an LCD display available in both English and French, which can display up to 4 weight and temperature measurements per screen for up to 8 connected silos. ST1 system options include integration of up to 16 temperature measurements, up to 4 relay interface casings (16 relay outputs per casing) and a Modbus TCP/Ethernet IP connection.

Specific industry applications for all three S Series models include:

For more information about this article from Vishay Precision Group click here.

Other articles from Vishay Precision Group.

Welcome to the Automation Inside Awards 2019!