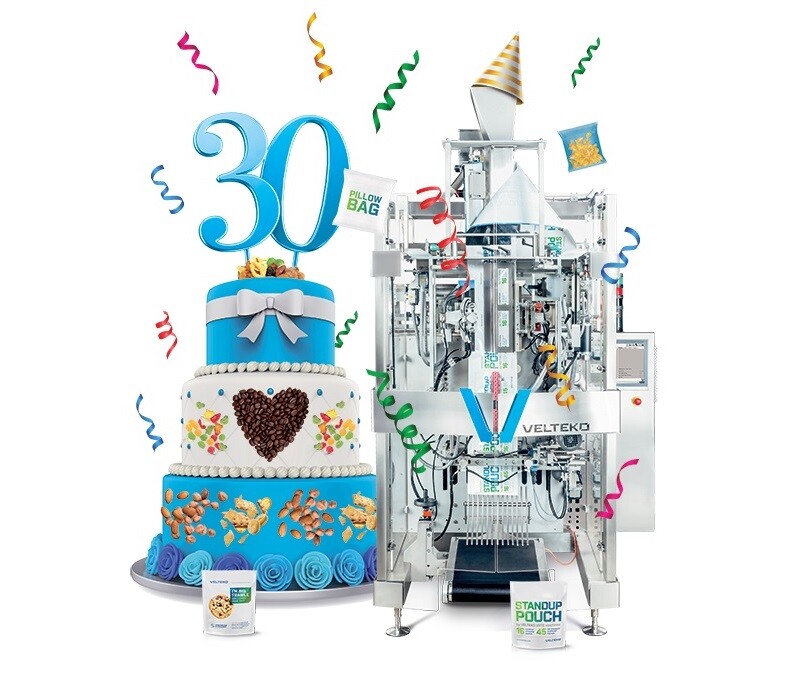 VELTEKO s.r.o. (Czechia) - Coffee, crisps, pasta or pet food. The products that people around the world encounter in their daily lives often have one thing in common, they were packaged on machines manufactured in the town of Vlašim in Central Bohemia. The town has been known as a centre of Czech engineering since the 1960s. It is within this vein that Velteko, over the past three decades, has developed into one of the world’s most successful producers of hi-tech packaging machines. This is all the more remarkable when one considers that in the 1990s, the founders started with only a few drawing boards and a small workshop.

Velteko was born out of the decision of two engineers, Petr Hrdina and František Šmíd, to manufacture packaging machines. Their ambitions were clear from the start: to develop, manufacture and offer technically sophisticated, reliable and powerful packaging machines fully comparable to those of world competitors. It only took them a few years to achieve this. The next strategic step was to construct customised vertical packaging machines, which the company still does to this day.

The first machines were created in very modest conditions:

Hrdina & Šmíd, the original name of the company, was established in 1991 and started working out of a small rented office, with only basic equipment for the construction of machines. ‘In the beginning, we only had two drawing boards. However, we soon managed to develop and sell our first machine - dosing weighers for a large Czech food producer. Similar machines subsequently found a place in many other companies. Maybe some of them are still in operation somewhere!’ says Petr Hrdina whendescribing the beginnings of Velteko.

About a year later, Velteko was established in cooperation with a third partner, Pavel Chvojka. The dosing weighers were soon followed by the company´s first vertical packaging machine, namely the HSV100. This machine became the basis for the long-term development of the range of packaging machines and product lines the company currently offers. These packaging machines have subsequently found their way to well-known food companies such as Vitana and Opavia (now part of Mondelēz).

In the second half of the 1990s, the company built its first production facility; the second followed at the turn of the millennium. This period included a significant expansion into foreign markets with the establishment of subsidiaries in Poland and Russia. With the construction of the new production facilities, Velteko was able to significantly increase its production capacity. At that time, it was also one of the first manufacturers in the world to launch the dual tube continuous vertical packaging machine - HSV220. It made it possible to pack twice as many products with the same footprint and double the packaging performance. Its current successor can pack up to 400 bags per minute and is one of the most powerful packaging machines in its class.

A technological milestone was achieved in 1997 when Velteko launched the innovative HSV101-FLEXIBLE vertical packaging machine. It was unique in that it included a set of options and features generally referred to as “versatility”. Versatile packaging machines are modular and allow easy conversion without the need for complex service and design adjustments. The operator can therefore switch to other types and sizes of bags without lengthy production interruptions and the need to invest in a new machine. Machines of this type can solve not only the current, but also the future needs of customers and their markets.

Another major technological innovation in this period was the switchover to controlled packaging machines using industrial computers. This provides not only greater user comfort when operating and setting up a machine, but also, for example, the possibility of their remote management and service. ‘Powerful control computers also enable sophisticated control of machine mechanisms, bringing higher packaging performance and extending machine life,’ says Petr Hrdina when describing the technological innovation. Today, control systems belongs to Velteko’s exceptional technological know-how.

In 2010–2012, Velteko already had more than 80 employees. The rapid growth of the company was the main reason for the construction of a new office building, which is primarily home to the company’s sales and development departments. In 2018, a third production facility was erected, and the development and manufacture of the HSV210-SLIM packaging machine got underway. This machine combines high performance with low space requirements.

Velteko is currently one of the world’s leading manufacturers of vertical packaging machines. Its products can be found on all continents except Antarctica. The quality of Velteko machines is evidenced, among other things, by the fact that a large number of those manufactured before the year 2000 are still in operation around the world - for example, in Nestlé packaging factories.

The company continues to actively develop new equipment, the latest innovations being the DOYPACK 360 and PRIME 360 vertical packaging machines. In development, in line with the current trend in the packaging industry, we are focused on achieving greater environmental sustainability through the use of paper-based packaging, biodegradable plastics and fully recyclable materials.

For more information about this article from VELTEKO s.r.o. click here.

Other articles from VELTEKO s.r.o..