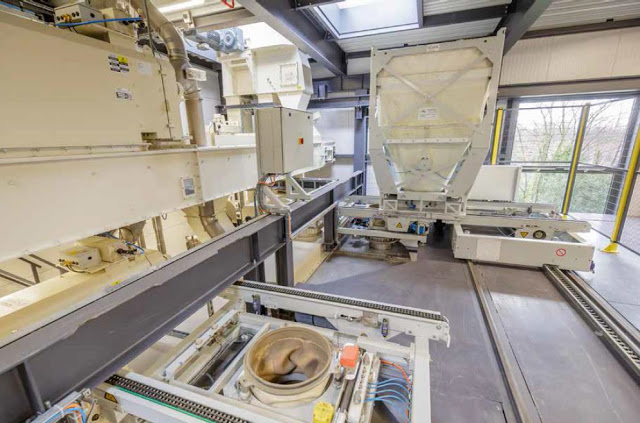 Premix producer Twilmij’s new plant has to double the current production of 50,000 tonnes per year. The first phase of the modern, man-hour saving 1,500m² production facility is ready. The integration of the fully automatic container transport system, which also prevents contamination, is a novelty in the premix branch.

Twilmij in Stroe manufactures premixes for animal feed and works with no less than 350 different types of raw material. “One batch can contain up to sixty different types of raw material. By automating the raw material addition through use of containers, we are not only saving on man-hours, we also minimize the chance of contamination. What is necessary for one animal, can be unnecessary for the other”, says production manager Ton Megens. The exact and pure composition are an important issue in the production of premixes. Premixes are a carefully composed base material for compound feed producers. Even though they make up only 0.5-2 % of the animal feed, they are crucial to improve the growth and health of the animals and therefore also to the productivity and efficiency of the farmer.

New Production Facility:
The new 1,500m² production facility which was commissioned in September 2016, consists of 62 raw material silos, five finished product silos, four ALFRA dosing weighers, two Nauta blenders and a third bagging line, complete with a palletizer and a wrapping machine. The new plant is equipped with a fully automatic transport system for 20 containers of 2.6m³. The containers consist of a frame with coated polyester cloths, equipped with a vibration system.

The transport system has an elevator with chain transport that connects the new and old facility with each other. In the new plant, raw materials are no longer manually added to the blender, the process is automated with the use of containers. The containers are also used in the old plant for dosing processes. “The process optimization is part of a ten-year plan”, quality manager Alphons Oosterwegel explains. “We have discussed our ambition to double the production with the community and at the same time arranged the permits for the investments in the next construction phase. We have an ATEX-certified and very clean plant with a proper dust exhaust. The noise reduction has also been improved.”

Replacement Of Manual Work:
“Manual addition in the new plant is a thing of the past. With a push off the button the system transports the raw material out of a container via chain transport to the blender”, says Ton Megens. “In addition, compared to the old situation dosing with this new method is much faster. The dosing capacity has also doubled. Also, the direct transport from the silos to the blender is fully automatic.” According to Alphons Oosterwegel, the innovative part of the design is the multiple dosing. “What makes this new design in our branch innovative, is the fact that we weigh the different types of raw material such as minerals and vitamins on multiple positions and bring them together in one blending process.”

This physical dosing, weighing and transport system with separate containers and software control has been developed and carried out by KSE. First, KSE did a thorough analysis of the recipe database of Twilmij. This resulted in a practice based, custom-made system of dosing and weighing installations. The smallest dosing installation processes from 50 grams and upwards, the largest up to 4,000 kilograms. This offers us maximum possibilities to automate our processes”, says Ton Megens. “In addition to that, the containers can be used flexibly. A container that has been placed on a dosing unit, can be replaced very simply with a forklift. “For example, it takes an employee less than half an hour to take off six containers and replace them with six new ones that contain different raw materials”, Ton Megens explains. 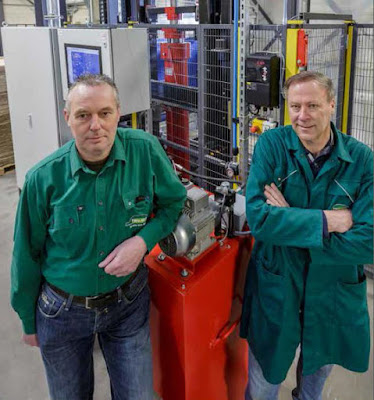 Production manager Ton Megens and quality manager Alphons Oosterwegel: “With the new plant and the fully automatic transport system, Twilmij is focusing on doubling the production.”

Elevation of Efficiency:
The new system requires considerably less man-hours per 1,000 tonnes. Megens expects the advantages will increase even further when the production will be increased with among others the already placed silos in the next expansion phase: “We already know that we can easily cover the production elevation with our current 25 FTE’s in the production facility. And, when the production increases in the next phase and we have dealt with all the teething problems, for example, finetuning the lagging in transport, contact signals, adapting container-ID, writing and reading of RFID tags, then we might achieve more than 25 % productivity improvement per FTE. People will have a controlling duty rather than physical labour”, Ton Megens explains.

There is already a 50 % increased productivity with the new bagging line. Also, the scaling replaces more bagging goods with bulk supply per lorry. Oosterwegel emphasizes the efficiency: “The lab research costs (purity control, content of active substances and/or absence of undesirable substances) for lorries carrying one type of raw material are much lower than, for example, lorries carrying seven different types of raw material.” 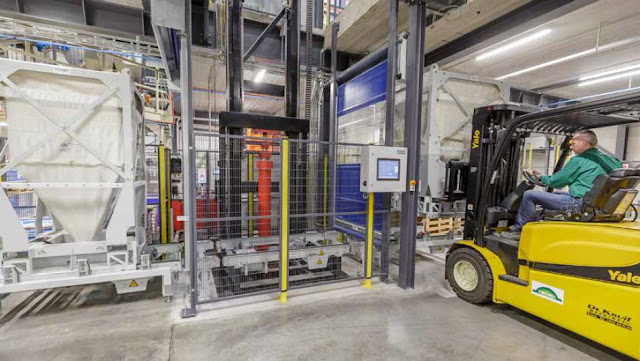 The innovative container system is very flexible. A container placed on a dosing unit can be replaced within 5 minutes by another one with a forklift.

Minimizing Contamination:
The reason for choosing this container system has, next to efficiency improvement, also to do with minimizing contamination. After each batch, the residue is blown out of the containers. “Preventing contamination is inseparable with the high quality that we pursue. For this reason, we also work with family codes for all our recipes. We analyze which types of raw material can and which ones absolutely cannot end up in a recipe. We also register what we produce before and after one specific batch”, says Alphons Oosterwegel. Depending on that, Twilmij decides whether the equipment has to be flushed to limit the chance of contamination. This also affects the transport. Twilmij has its own bulk lorries which are maintained by the premix producer itself. “For each bulk lorry, we carefully register which load we are transporting at what time. To prevent contamination, we work according to established procedures and clean the lorries.”

Use of Gravity:
The new plant is built quite high which does not only increase the silo capacity, but also enables the use of gravity. The two Nauta blenders are placed up top in the plant. This innovative solution saves on transport and this has two advantages. By use of gravity, energy costs are dropping significantly and less transport meters lead to less contamination. The results are great. “The external laboratory does a periodically exam in the context of the GMP requirements. With its 0.4 %, Twilmij already has an extraordinary low contamination percentage vs. an average of 2 to 5 % in the compound feed industry. In the new plant, we will even drop below that”, Alphons Oosterwegel says.

For more information about this article from KSE Process Technology click here.

Other articles from KSE Process Technology.