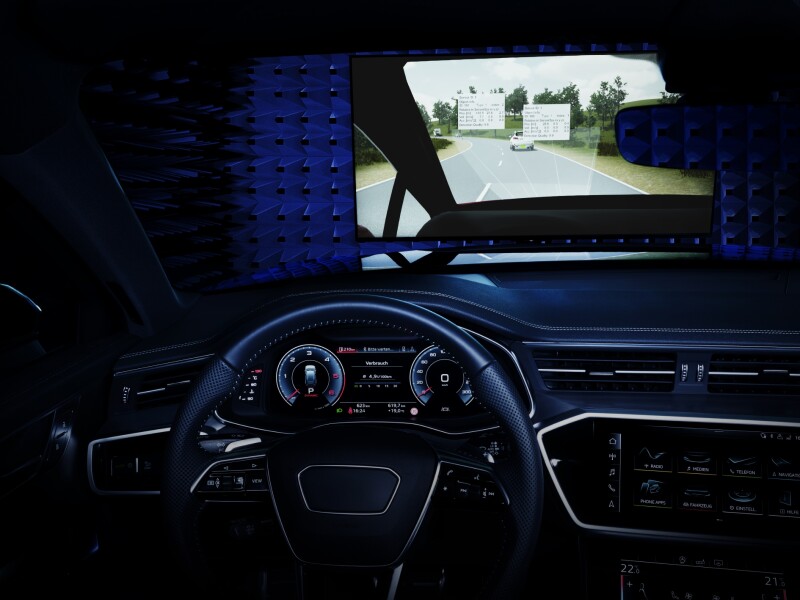 HiL testing is a technique used to accelerate the development of complex real-time embedded systems such as ADAS in situations where using a fully assembled vehicle is not possible or too costly, time-consuming or dangerous. Instead, the operation and behavior of supporting systems are electronically simulated.

The system setup consists of the Vector DYNA4 virtual test drive software, which provides the environment simulation and the user interface for scenario configuration and test execution, and the Rohde & Schwarz radar test system, which generates dynamic artificial objects for the radar sensor under test based on ASAM OSI object lists implemented in the DYNA4 environment simulation software. Vector CANoe receives the radar sensor's bus output signals with the objects detected by the radar, and the software then analyzes and visualizes them. The detected objects are also compared with the simulated ground truth.

The Rohde & Schwarz radar test system comprises the R&S AREG800A automotive radar echo generator as the digital backend and the R&S QAT100 advanced antenna array as the frontend. The solution opens up a completely new world of possibilities for testing radar-enabled ADAS features and ensures the safety of autonomous driving functions in HiL setups. Innovative antenna array technology allows complex artificial objects to be generated for the radar sensors at variable distances and with variable radial velocity, object size and angular direction. Antennas and test equipment do not need be moved physically. A responsive and dedicated HiL interface that conforms to the ASAM open simulation interface specification allows realistic over-the-air stimulation of radar sensors with challenging, complex and even risky driving scenarios. The radar test system is future-proof thanks to a modular and scalable concept. In addition to offering standard radar based ADAS feature tests such as adaptive cruise control (ACC) and autonomous emergency breaking (AEB) scenarios, the system can be easily upgraded to cover advanced test cases. It can grow to meet the complexity of future scenarios – an important step on the way to autonomous driving.

Combining the best of simulation and over-the-air radar stimulation is a significant step forward. The combination accelerates the development of ADAS features and enables users to reliably and realistically test ADAS/AD features and master complex validation processes in a fully controllable and representative environment.

As a leading worldwide provider of test and measurement software, instruments and systems, Rohde & Schwarz employs its technical expertise to develop innovative solutions for the entire automotive lifecycle from predevelopment to production. OEMs, tier 1s and chip suppliers around the world rely on the company's proven test solutions for automotive radar, connectivity, infotainment, high-performance computing and EMC compliance. With innovative solutions for radar tests in development, integration and production, Rohde & Schwarz supports its customers as a reliable partner for the launch of next-generation ADAS and AD systems. The company's many years of experience and expertise in wireless communications ensure robust connectivity conforming to all standards from 5G and C-V2X to UWB, Wi-Fi 6 and GNSS. Rohde & Schwarz instruments enable the development and debugging of in-vehicle networks with modern bus speeds as well as ECUs such as high-performance domain controllers, and help to eliminate EMC issues. Rohde & Schwarz also offers T&M equipment and custom turnkey test systems for carrying out EMI and EMS measurements on vehicles and vehicle components in line with all major CISPR and manufacturer-specific EMC standards. These systems and equipment support full vehicle antenna testing and wireless coexistence testing with the user's own systems and instruments. The company also offers outstanding solutions for at the component and board level (in-circuit, functional and BS tests) during ECU production. Partners and customers around the world use these test solutions to ensure automotive components and systems function correctly, interact flawlessly and smoothly and communicate faultlessly with the outside world.

Vector is the leading manufacturer of software tools and embedded components for the development of electronic systems and their networking with many different systems from CANs to automotive Ethernet.

Vector has been a partner of automotive manufacturers and suppliers and related industries since 1988. Vector tools and services provide engineers with the decisive advantage to make a challenging and highly complex subject area as simple and manageable as possible. Vector employees work on electronic innovations for the automotive industry every day. Worldwide customers in the automotive, commercial vehicles, aerospace, transportation, and control technology industries rely on the solutions and products of the independent Vector Group for the development of technologies for future mobility.

Vector worldwide currently employs more than 3,000 people with sales of EUR 692 million in 2020. Vector is headquartered in Germany (Stuttgart) and has subsidiaries in Brazil, China, France, the UK, India, Italy, Japan, Austria, Romania, Sweden, South Korea, Spain and the USA.

The Rohde & Schwarz technology group is among the trailblazers when it comes to paving the way for a safer and connected world with its leading solutions in test & measurement, technology systems, and networks & cybersecurity. Founded more than 85 years ago, the group is a reliable partner for industry and government customers around the globe. On June 30, 2020, Rohde & Schwarz had around 12,300 employees worldwide. The independent group achieved a net revenue of EUR 2.58 billion in the 2019/2020 fiscal year (July to June). The company is headquartered in Munich, Germany.

For more information about this article from Rohde & Schwarz click here.

Other articles from Rohde & Schwarz.