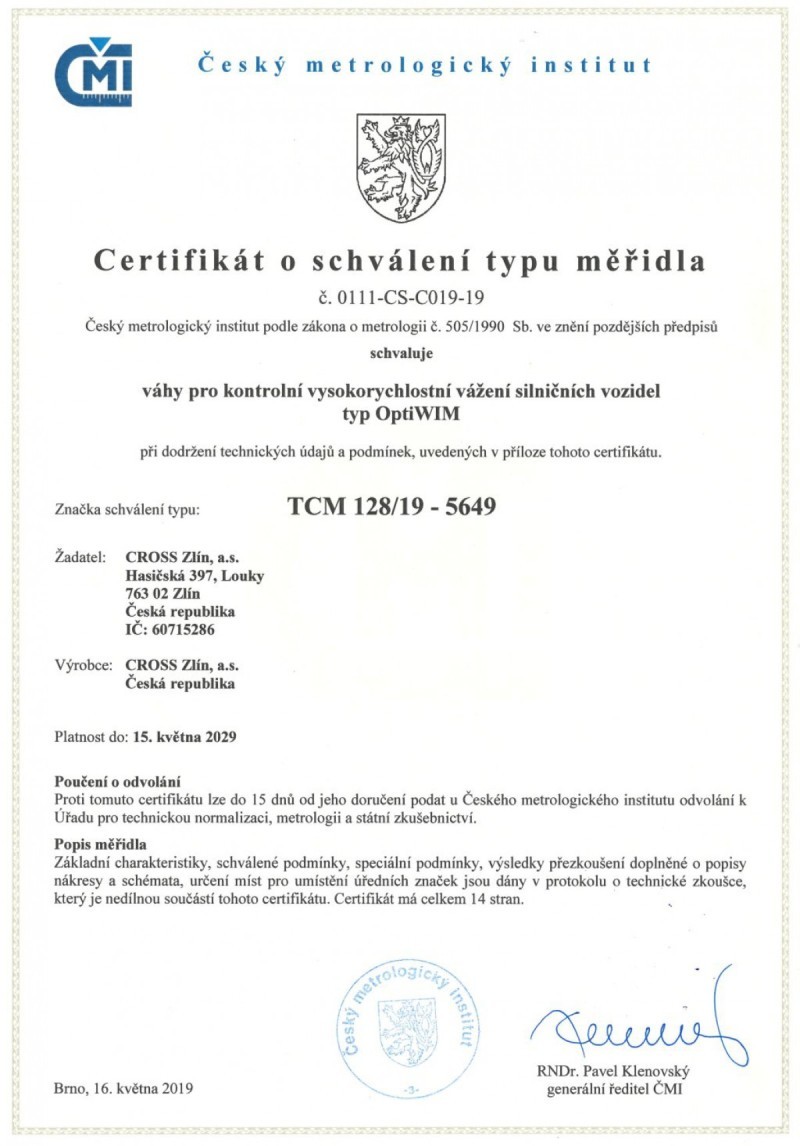 CROSS Zlín, a.s. (Czechia) - Demanding testing of the new OptiWIM product has been completed by CROSS Zlín, a manufacturer and supplier of road transport technologies. Its patented dynamic fiber weighing technology has received a certificate for its type.

The certification was preceded by three separate tests. The first simulated the load in normal operation. For this purpose, a pilot installation was prepared on the D1 motorway near Kroměříž. Through the sensors embedded in the aluminum console on the road surface, cars of varying speed and weight passed over for a few days, with the measured mass deviation of within a tolerance of up to 5% compared to the results of certified mobile scales commonly used by the Czech Police or Customs. The second part of the testing was carried out in a specialized laboratory, where electromagnetic compatibility (EMC) of the switchgear and the whole equipment was measured. The testing was completed with temperature tests, which were carried out in a special chamber with adjustable temperature from -40 º C to 80 º C. The functionality of the system was tested throughout the temperature range. "Testing was very challenging for everyone involved. For example, workers in special overalls were moving in the chamber and placed certified weights gradually over the entire length of the console. Just this process has been going on for more than a week," says Vladimir Kašić, product manager at CROSS Zlín.

The certificate obtained is valid in the European Union. Thanks to this, OptiWIM is classified as a proven measuring device. Of course, when inserting the sensors into the road, we must pay attention to the parameters of the road, we must check the ripple of the top layer of asphalt or its possible cracks and after installation, the system must calibrate in place for the required accuracy. If the investor decides to use the system for automatic fining, the Czech Metrology Institute will also carry out the verification," added Vladimir Kašić.

Certified OptiWIM was officially presented at this year's ISWIM international conference, but won the first prize a year earlier at the world's largest Intertraffic trade fair in Amsterdam, where it won the Innovation Award in the transport infrastructure category. "OptiWIM's long-term internal testing was underway, and its results were so convincing that we believe that optical fibers will fully replace today's dynamic weighing technologies with piezo-polymer or silicon sensors in the future," said CROSS director Tomas Juřík. Sensor life is estimated to be 10 years. CROSS has already had a great interest in this new product from a number of countries. Currently, the system is being validated for a further 5 sites, with live installations in the winter of this year.

For more information about this article from CROSS click here.

Other articles from CROSS.