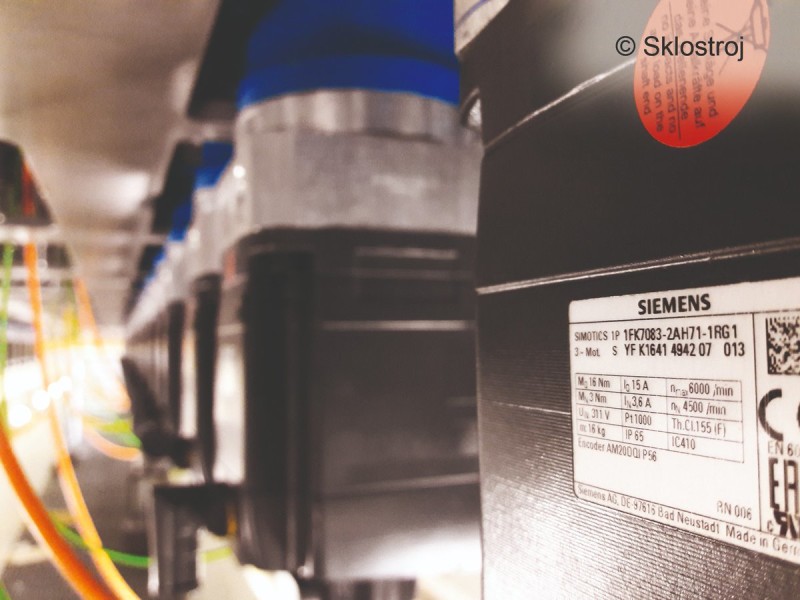 Siemens (Germany) - Sklostroj Turnov CZ, s. r. o. (Sklostroj) is a leading international manufacturer of container glass machines. The company has relied on Siemens drive and control technology for over twelve years. Together, the two companies have developed the Drive and Timing Control System utilizing Siemens drive and control technology. The high degree of associated plant automation makes it easier for customers to change over production, increases flexibility, and simultaneously reduces operating errors. The use of standard components also ensures that customers throughout the world have a reliable source of spare parts.

Individual Section Servo (ISS) machines fitted with the Drive and Timing Control System are well set up for digitalization due to the modern automation technology and open systems used. Motion control is provided by a Simotion D drive-based motion controller which, in some cases, coordinates over 120 Simotics S servomotors and a range of auxiliary drives via modular Sinamics S120 converters. A distributed Simatic fail-safe CPU with a fail-safe ET 200SP distributed I/O controls higher level and safety-oriented processes.

Sklostroj has developed individual automation concepts for its customers based on these standard components. Recent additions to the portfolio include standardized interfaces for connecting a lubrication robot and for data exchange with higher level systems. In order to make production changeover as easy as possible, Sklostroj groups the relevant parameters together so that they can be managed through the control system. The background parameters can be automatically set and modified by simply pressing a few buttons which makes production changeovers not only easier but also safer. By using standard components, customers across the globe benefit from a rapid spare parts service as the need occurs.

Sklostroj is a leading international manufacturer of container glass machines and has relied on Siemens control and drive technology for over twelve years now in the development of its plants.