Learn how an Incremental Encoder works, courtesy from Dynapar 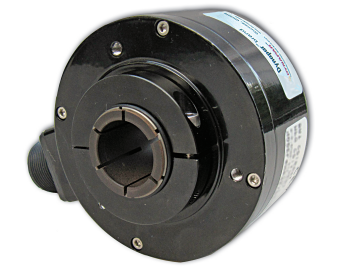 Dynapar (USA) - An incremental encoder can be used in positioning and motor speed feedback applications which includes servo/light-, industrial- or heavy-duty applications.

An incremental encoder provides excellent speed and distance feedback and, since there are few sensors involved, the systems are both simple and inexpensive. An incremental encoder is limited by only providing change information, so the encoder requires a reference device to calculate motion.

The typical assembly of an incremental encoder consists of a spindle assembly, PCB, and cover. The PCB contains a sensor array that creates just two primary signals for the purpose of position and speed.

Optionally, additional signals can be provided:
An index or ‘Z’ channel can be provided as one pulse per revolution signal for homing and pulse count verification on the A and/or B channels. This index can be gated to either A or B in their various states. It can also be un-gated and vary in width.

Commutation (U, V, W) channels can also be provided on some encoders. These signals are aligned to the commutation windings found on servo motors. They also ensure that the drive or amplifier for those motors apply current to each winding in the correct sequence and at the correct level.

Incremental Encoder Alternatives:
Resolvers:
Resolvers are electro-mechanical precursors to encoders, based on technology going back to World War II. An electrical current creates a magnetic field along a central winding. There are two windings that are perpendicular to each other. One winding is fixed in place, and the other moves as the object moves. The changes in the strength and location of the two interacting magnetic fields allow the resolver to determine the motion of the object.

The simplicity of the resolver design makes it reliable in even extreme conditions, from cold and hot temperature ranges to radiation exposure, and even mechanical interference from vibration and shock. However, the forgiving nature of resolvers for both origin and application assembly comes at the expense of their ability to work in complex application designs because it cannot produce data with enough accuracy. Unlike incremental encoders, resolvers only output analog data, which can require specialized electronics to connect with.

Absolute Encoder:
Absolute encoders work in situations where accuracy for both speed and position, fail tolerance, and interoperability matters more than system simplicity. The absolute encoder has the ability to "know where it is" in reference to its position in case of system power-down and restart if the encoder were to move during a power-down.

The absolute encoder itself understands the positioning information – it doesn’t need to rely on outside electronics to provide a baseline index for the encoder position. Especially when compared to resolvers and incremental encoders, the obvious strength of absolute encoders is how their positioning accuracy affects the overall application performance, so it is typically the encoder of choice for higher precision applications such as CNC, medical and robotics.

For more information about this article from Dynapar click here.