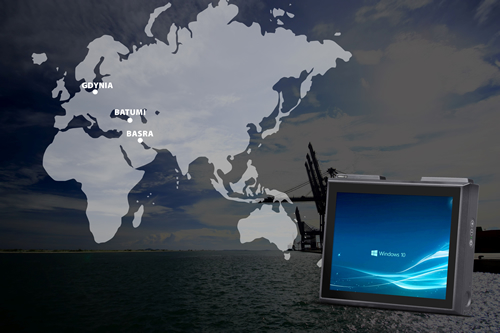 JLT Mobile Computers, a leading developer and manufacturer of reliable computers for demanding environments, announces that it has successfully delivered a total of 50 JLT VERSO™ 12 mobile computers to the Basra Gateway Terminal (BGT). BGT, which is operated by leading terminal operator International Container Terminal Services Inc. (ICTSI), is Iraq’s premier container and multi-purpose cargo handling facility at the port of Umm Qasr. This order represents the third port in the ICTSI group that uses JLT mobile computers, following major design wins at Baltic Container Terminal (BCT) in Gdynia, Poland, and Batumi International Container Terminal (BICTL) in Batumi, Georgia. BGT opened an extension to its facility on 12th October 2016, with the first container lifted by one of two new ship-to-shore cranes during the opening ceremony.

Working with its key contractor and business partner Autepra, JLT delivered 50 VERSO 12 rugged mobile computers prior to the opening of BGT’s new facility. The computers are operated with new equipment including reach stackers, terminal tractors, and forklifts. All the BGT computers are used with the Navis N4 terminal operating system (TOS).

In this part of the Middle East, temperatures can reach the extremes on a daily basis, so it’s essential that the computers used can withstand this environment to ensure that operations keep running seamlessly. Any interruption in service, however small, can have massive knock-on effects on productivity.

“Basra Gateway Terminal has one of the harshest operating environments for a port terminal in the world,” says Sebastiano Cerneka, ICTSI’s Head of IT for Europe and the Middle East. “This summer, we recorded a temperature of 53°C, the hottest in the Western Hemisphere. During that time the JLT VERSO 12 computers, which are not used in air conditioned environments, kept working. Being able to rely on JLT’s VERSO 12 rugged mobile computers means we can continue to meet the needs of shipping lines and cargo shippers despite the extreme weather and temperatures we experience as a matter of course.”

“While the key challenge for the rugged mobile computers supplied to BGT is absolute reliability in extreme temperatures, seamless integration with the port’s systems was also critical,” points out Tomas Girdzevičius, CEO, Autepra. “Selecting JLT’s VERSO 12 rugged mobile computers meant the temperature requirement could be met with a computer that’s pre-certified as ready to work with the terminal operating system BGT was already using. Integration was therefore as quick and straightforward as possible.”

Equipped with Intel® Atom Quad Core™ Series processors, the VERSO 12 computer is the latest generation of high-performance vehicle-mounted PCs from JLT that are developed from the ground up for use in the harshest environments and for business-critical functions. JLT’s entire VERSO range has been validated as ready for integration into any shipping port or terminal running Navis N4.

For more information about this article from JLT Mobile Computers AB click here.