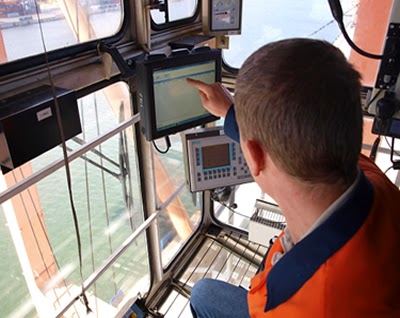 JLT Mobile Computers (Poland) - JLT Mobile Computers, Swedish developer and manufacturer of rugged computers for demanding environments, is pleased to announce it has successfully completed the delivery of over 70 rugged mobile computers and modems for an EU-funded project to upgrade the wireless communication system at Baltic Container Terminal Gdynia (BCT), one of the biggest container terminals in the entire Baltic region.

Working with the key contractor and business partner, Autepra, JLT presented its VERSO 12 rugged mobile computer to BCT, proving it could successfully meet all and exceed most of the stringent requirements placed on the mobile computers when operating in one of the most inhospitable environments possible for electronic equipment and wireless networks.

Shipping ports win and maintain business based on their up-time and efficiency in moving containers from ship to shore and on to their final destination. The communications infrastructure is crucial in delivering this quality of service, dependent on the reliability of the technology selected.

Bidding for the project was open to all but only a small number of providers were confident they were able to meet the strict requirements put in place by the EU. The project was required to replace out-dated narrow-band technology.

“The main challenge in a project like this is in providing equipment that works reliably in such a tough environment and delivers the performance including wireless coverage throughout the port,” explained Tomas Girdzevičius, MD, Autepra. “By selecting JLT’s VERSO 12 rugged mobile computers and the JLT jLink rugged modem, we were more than able to meet that challenge and provide the required five year warranty with confidence. With JLT the customer can expect long-term proctection for its investment.”

From delivering the first evaluation unit in March this year, to final delivery in time to meet the August 6 deadline for completion, Autepra and JLT have been intrinsic in the project’s success. As with all EU tenders, the requirements for the project were extremely specific about the configuration and performance of the equipment implemented – demands that VERSO 12 met and often exceeded.

Although experienced in supplying rugged mobile computing solutions for demanding industries including mining, and having previously delivered products for other commercial ports, this was the first purely EU-funded project JLT has worked on. Autepra’s Tomas Girdzevičius added: “JLT’s VERSO 12 computer has proved itself to be the most appropriate solution for port applications, thanks to the compact formfactor in combination with high processing performance and a highly readable display. We were happy to select it for this project and look forward to working with JLT on future projects.”

About JLT Mobile Computers:
JLT Mobile Computers is a leading developer of rugged mobile computers for demanding environments. These PC-type computers are developed and manufactured in Sweden for professional use and are characterized by very high reliability in the face of moisture, dust, vibration, electromagnetic fields or extreme temperature – reliability that is required for use in areas such as transportation, warehousing / logistics, forestry, mining, automation, military and rescue vehicles. JLT operates globally with sales partners, primarily in Europe and the United States, and has delivered over 90,000 PCs. JLT’s turnover in 2013 was SEK 61 million. The headquarters in Växjö, Sweden houses the development, service and administration departments. The company was founded in 1994 and since 2002 has been listed on the NASDAQ OMX, First North, under the symbol JLT by Remium as Certified Advisor.

For more information about this article from JLT Mobile Computers AB click here.