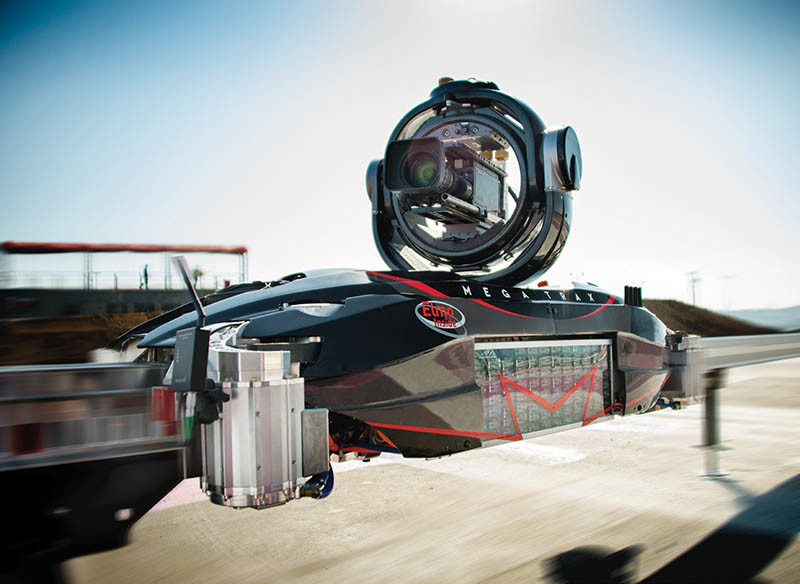 Computer-generated imagery (CGI) can create extraordinary scenes but for edge-of-the-seat blockbusters, there’s no substitute for live-action shooting. Live filming enables directors to change camera angles, explore alternative approaches with their actors, and even swap out dialogue. The problem is that human-operated dollies simply can’t deliver the explosive speed and acceleration demanded by cutting-edge action films. That’s why Mega Trax developed the MX 500 semi-autonomous, high-speed robotic dolly system. With the help of compact, high-power servo drives from Elmo Motion Control, the MX 500 can accelerate cameras to speeds of better than 90 mph in a matter of seconds. The best part is that the drives enable the MX 500 to execute these moves repeatably, reliably, and in the most rugged conditions imaginable.

To build the MX 500, the Mega Trax design team faced challenges at every turn, starting with the payload. The types of cameras used for feature films can weigh nearly 100 pounds. They travel down a rail system on a cart known as a dolly, which can weigh several hundred pounds in its own right. Motion needs to be fast, smooth, and repeatable so that the director can shoot the scene again and again if desired.

The team could have based the system on a single motor that linked to the wheels using couplings and gearing. The problem is that this would have introduced compliance and backlash, potentially compromising motion quality. Instead, the team chose to power each wheel of the MX 500 dolly cart with a dedicated, high-power servo motor. The challenge was finding a motor-drive solution that could not only deliver explosive acceleration but also ensure tightly synchronized operation among the four motor drives to prevent any shakiness from appearing in the shot.

With distances of travel that can extend to several hundred feet, the MX 500 needed to be a portable device. That introduced all of the challenges presented by portable applications the drives needed to be compact and lightweight while still delivering enough power to run the motors. They also had to be efficient enough to enable reasonable battery lifetime. After all, a robotic dolly doesn’t help if filming is constantly interrupted by the need to charge batteries.

One of the key requirements for the MX 500 is that it be easy to use and efficient to program. Filmmakers operate on tight budgets and even tighter shooting schedules. For outdoor shots, they are also at the mercy of the light and the weather. Directors and producers were not likely to tolerate a system that took special training and large amounts of time to program every time a new shot needed to be set up. The Mega Trax team was looking for the user interface that would be easy to customize and teach.

Finally, the solution needed to be robust enough to survive the conditions of outdoor filming. Location conditions can rival anything presented by industrial applications. Equipment must survive exposure to temperature extremes, dust and dirt, moisture, shock and vibration, and more. Film crews have to be able to count on the equipment to deliver the shot every time. That means that they also need to be able to count on the drives.

When the design team at Mega Trax went looking for a drive that could do the job, they found it with Gold Drum HV servo drives from Elmo Motion Control. “Elmo has a great reputation for precision motion control, so we already had a high level of confidence in the company,” says Howard McCain, cofounder and CEO of Mega Trax. “Then, we realized that Elmo’s drives were the only ones that could handle our power and motion control requirements.”

Each Gold Drum HV servo drive can handle up to 100A/800V and is capable of delivering more than 65kW of continuous output. A key advantage of the drives is that they are built for high power density, which enables them to deliver that output power in a compact, lightweight form factor well-suited for portable applications. Gold-Drum drives also operate with efficiencies of up to 99%. As a result, the MX500 is capable of up to 50 high-speed, quarter-mile runs per charge of the system’s two 800-V batteries.

Of course, it is not just the quantity of motion but the quality of motion that counts. To keep the card moving smoothly, the system required highly synchronized operation of all four axes with minimum latency. The team accomplished this performance by taking advantage of the drives’ built-in intelligence and connectivity. The four drives on the wheels of the dolly cart are linked together in a master-slave architecture using CANopen. They operate in torque-follower mode, with the master drive handing down commands to the slave drives.

In addition to drive hardware, Mega Trax team took advantage of Elmo Application Studio II (EASII) motion design software to create a flexible, user-friendly programming environment for the MX 500. EASII enables users to quickly create and implement motion, and intuitively program and manage Elmo’s servo drives. Remote connectivity via a mobile device attached to the robotic dolly made it possible for Elmo technicians to optimize performance by tuning the drives while the system was on the track. “I loved the online tool that provides EASII software training with a live video link to a real machine—it allowed me to personally perform a quick tune on our motors to get everything rolling,” says David Kuklish, Co-founder and VFX Supervisor, Mega Trax.

Powered by the Elmo Gold Drum HV drives, the MX 500 can safely go from 0 to 60 mph in 3 s with top speeds in excess of 90 miles an hour. It can operate over terrain with grades of up to 60% and gently curved slopes. It offers fully integrated safety logic and wireless operation across distances of up to 1.5 miles. The performance is a testament to the engineering skills of the Mega Trax team, not to mention their collaborators at Elmo.

“There was no question that Elmo’s drives were the only option for the MX 500 system,” says McCain. “Beyond the technology, the level of support the Elmo team provided to us was incredible. They came to our location to help our staff tune the drives and gave hours of additional support on the phone. We could not have come close to completing this project without their help and support.”

“The customer service and support we received from Elmo was outstanding,” agrees Kuklish. “Whether remotely tuning drives in real-time or troubleshooting over the phone, I know we are in good hands.”