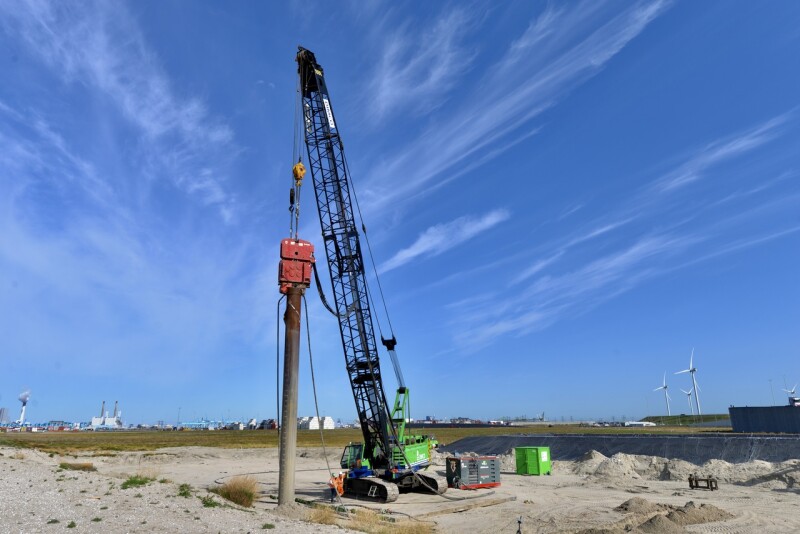 This method involves fluidising the seabed with water jets, which ensures the monopiles sink much quicker - and with significantly less noise - under their own weight. To assess this new system at the Maasvlakte site, tests were carried out to measure the monopiles’ vibrations and deformations using strain gauges, supplied by HBK.

Ben Arntz, founder and director of GBM Works explains: “Driving foundation piles for wind turbines into the seabed causes vibrations, pressure waves and - in particular - also a great deal of noise. When a steel foundation pile with a diameter of eight metres is driven, the noise production can reach a level up to 180 decibels. The vibrations, the pressure waves and the loud noise have a negative effect on underwater life. Therefore, regulations have been adopted to reduce the noise production of piledriving activities at sea. International guidelines are expected to become stricter in the coming years. Our new method responds to this.”

Mr. Arntz continues: “On the inside of the pile, dozens of water jets spray seawater into the seabed. As a result, the seabed takes on properties comparable to those of quicksand. The resistance of the seabed decreases and the foundation pile sinks into the seabed. The second part of the solution is a vibratory hammer that replaces the hydraulic piledriving rig. In a traditional piledriving rig, a steel pile hammer strikes a foundation, made from the same material, which produces a great deal of noise. The vibratory hammer consists of rotating disks mounted on top of the monopile. These cause the monopile to vibrate so that it sinks into the fluidised seabed layer.”

To assess the operation of the system and demonstrate the added value of the new method in practice, a series of tests was conducted at the Maasvlakte in September 2020. “The aim was, among other things, to collect information on the vibrations that arise, the water pressure that is needed, the behaviour of the soil and - of course - the effect on noise damping. In all, 62 test installations were executed with four setups: two with the jet gun system and the vibratory hammer, and two tests with the vibratory hammer alone on the same foundation piles. To measure the strain in the monopiles GBM Works chose to use strain gauges from HBK. These strain gauges are often used to monitor wind turbines. When you exert pressure on steel monopiles, deformation occurs, and vibrations arise that cause noise. We measured those vibrations and also got some interesting information on fatigue in the foundation piles.’’

“Most of the data now has been analysed,” said Wouter Verschueren, Data & Model engineer at GBM Works. “We saw, for example, that the foundation piles with the vibratory hammer alone penetrated the ground no farther than three or four metres because the soil resistance became too high. With the jet gun and the vibratory hammer, the piles easily went to a depth of 10 metres, while the speed at constant force quadrupled. In a subsequent test cycle underwater the noise production of the solution with the vibratory hammer and the jet gun will be compared to that of a traditional pile hammer. A piledriving rig in combination with a sound mitigation system is currently used. These are complex systems that operate with an underwater shield around the foundation pile to damp the vibrations and noise. GBM Works expects a noise reduction of 90 to 95 percent thanks to the new system.”

It was recently announced that GBM Works will be granted a subsidy of 1,8 million Euro by RVO for the development of a prototype of the equipment.

For many decades, HBM and Brüel & Kjaer have been trusted across multiple industries to deliver highly accurate technologies and expertise in test and measurement and sound and vibration. HBM as the market leader in testing, measuring and analysis and Brüel & Kjær as the world’s leading solution provider for measuring and managing sound and vibration.

Speeding up Helmet Design with a Digital Twin