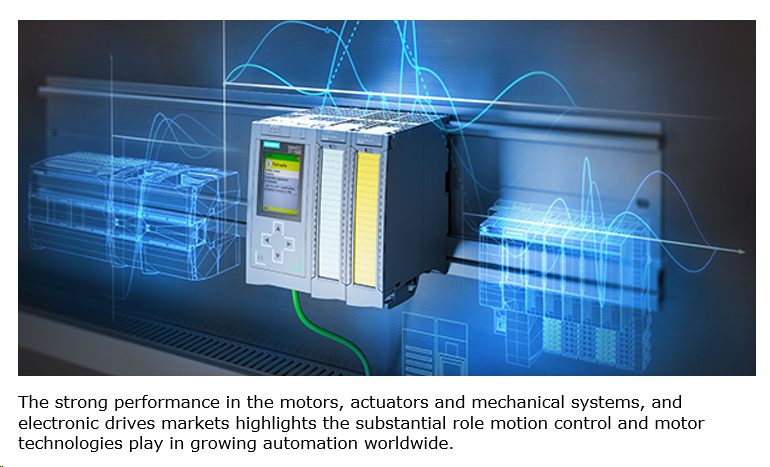 Automate (United States) - Press Release: The global motion control and motor market experienced record growth in 2018, with $3.827 billion in shipments, up 8 percent over 2017. According to the Motion Control & Motor Association, part of the Association for Advancing Automation (A3), shipments were up 3 percent in the last quarter of the year, at $946 million, contributing to the overall annual growth of the market.

“Motion control and motor technologies are getting smarter, more capable and more productive, and as a result, are playing pivotal roles in increasing the overall productivity of any given operation,” said Dana Whalls, vice president of A3. “As these technologies continue to advance, especially those targeted at progressively smaller devices, the industry will see even more growth.”

The largest categories within the overall market were motors (40 percent), actuators and mechanical systems (19 percent), and electronic drives (17 percent). Those three categories grew 11 percent to $1.508 billion, 12 percent to $735 million, and 7 percent to $641 million respectively, which contributed to the overall growth. The strong performance in these markets highlights the substantial role motion control and motor technologies play in growing automation worldwide.

Digitalization is having the biggest impact on the motion control and motors market. It saves on maintenance and downtime costs by providing data to identify probable component or machine failures well before they happen.

“Digital transformation of the industrial landscape has reached an inflection point, and implementation among early adopters has given way to broader market penetration,” Whalls added. “Data is now being captured at the component, machine, line, plant and enterprise levels. Modern components simplify digitalization with built-in connectivity, memory, and processing capabilities, and edge-computing devices send data sets to the cloud where it is mined with analytics. This enables much more rapid, informed decisions.”

Whalls expects to see higher, more intelligent performance in motors in a smaller footprint. “Frameless motors are providing greater flexibility for integration into compact spaces,” she said. “The increase in battery operated mobile devices, for example, has created a demand for smaller drives that fit in a constrained space and don’t add weight. Today’s smaller drives perform more intelligent functions with onboard memory and processing power that allow them to detect bearing defects, enable an operator to clear a jam without invoking lockout tag out, or even act as a master controller for a network of daisy-chained drives.”

Learn More About Motion Control and Motors at Automate 2019, April 8-11:

The Automate 2019 Show and Conference will explore how automation, including motion control and motors, will secure a company’s success in a technologically fast-paced world that is rapidly shifting the dynamic of today’s manufacturing. More than 500 vendors, integrators and other automation companies will demonstrate their solutions on the show floor, with many also sharing expertise in the conference sessions.

The Automate show is free to attend.

Founded in 2006, the Motion Control & Motor Association (MCMA) was developed to advance the global understanding and use of motion control and related automation technologies and to help our member companies and the industry grow. We promote innovation and growth from supply through distribution by providing comprehensive education, research, communication, industry trades shows, events and networking. Today, MCMA is serving the needs of hundreds of its member manufacturers, distributors, system integrators, manufacturers’ representatives, end users, suppliers, consulting firms, researchers and academics from across the globe.