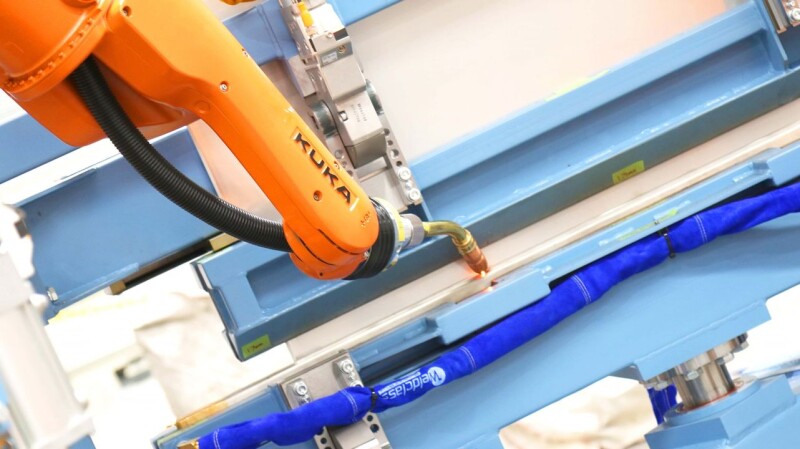 Scott Automation (Australia) - Glencore developed a new Cathode plate, ISAKIDD™, and needed a robotic handling and welding system to produce this new plate in bulk quantity along with their traditional range of plates.

Glencore Technology has been involved in the metals and mineral processing industries for almost 30 years and has developed technology for successful implementation into some of the world’s largest mining operations including in Australia, Chile, South Africa and Russia.

Glencore developed a new Cathode plate, ISAKIDD™, and needed a robotic handling and welding system to produce this new plate in bulk quantity along with their traditional range of plates. Glencore sought to engage in a collaborative approach with their automation provider given they had conducted internal trials for the system prior to Scott being involved. Following the recommendation of their welding supplier, Glencore brought Scott on board as the design and fabrication of this new system needed an automation specialist.

With experience in the design and implementation of materials handling and welding systems, Scott was an ideal automation partner for this project. Glencore also wanted a system that did not require constant support from Scott, especially with the install site located in the Queensland regional city of Townsville.

This system was produced using a coordinated approach with the Scott team in Dunedin, New Zealand, producing weld fixtures while the Scott team in Melbourne, Australia, took on the install and commission, working with both Glencore and other suppliers.

The system allows parts to go direct from stillage to a completed plate stacked in the outfeed without the need for operator involvement. A KUKA Robot picks sheets and bars for assembly, placing them in a weld station for a robotic arm to weld. Once welded, a second robot passes the plate through automated brushes, cleaning the weld. An operator is then safe to apply lugs before the robot loads the finished cathode to an outfeed station.

The robotic handling and welding system was described as “an eloquent, yet methodical ballet of productivity, with every move calculated for quality and efficiency” in Mount Isa Mine’s e-newsletter Resourceful.

Glencore are currently manufacturing plate orders with the system speed varying depending on the model of the plates being made and, to date, have made around 16,000 plates in the six months following commissioning, including their new cathode plate design.

"This feat would not have been possible with their existing machine and Glencore Technology’s Engineering Superintendent Noel Kimlin says, "Automating this process means we make more reliable, high quality plates while having the ability to synchronize outputs with production demand...I'm pleased to say the work was completed safely and within budget as well."

The system took just 10.5 weeks to install and commission, which included the break over Christmas. Noel says the installation, commissioning and training of production personnel was a great team effort. A timely install allowed Glencore to produce and complete their first ISAKIDD™ cathode plate order on 31 January this year. Increased order production, higher safety and higher production output were all Glencore requirements for this system, allowing them to have a continuous improvement process for their own clients and marking the start of a new era in production for their Townsville Copper Refinery.

For more information about this article from Scott Automation click here.

Other articles from Scott Automation.