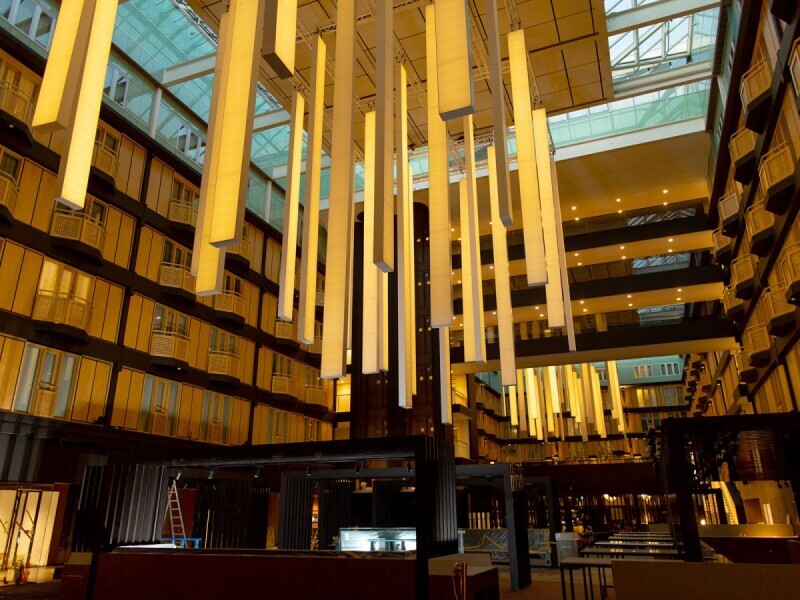 BroadWeigh (Sweden) - The Radisson Blu Scandinavia Hotel in Gothenburg, Sweden, recently commissioned a new ‘design lighting’ solution over the hotel’s common area. With a basic idea of what they needed, the team in charge of the install contacted leading stage technology company Priebe-ScanRig AB (PSRIG) to deliver and fit two large truss constructions with associated suspension. The truss would constitute as a carrier for the newly commissioned solution – with one of the constructions to be motorised while the other, permanently installed, would hang from steel wires.

“During the installation of the lighting solution, the truss grids needed to be raised and lowered. With the installation being performed over an extended period of time, the installers needed a fast and simple way to see the loads being applied on each suspension point.”

While Aart had included load monitoring in PSRIG’s original proposal for the work, it was initially scrapped due to cost restraints. However, during the install, it was decided that the load cells were vital as the customer wished to increase the capacity to more than originally calculated for.

“While load monitoring is becoming more of the norm in Scandinavia, there are definitely mixed opinions on the matter. When the clients are balancing their budgets, regrettably load monitoring is often down-prioritised in favour of other costly technical aspects, but increasingly as installations are becoming more complex and the importance of safety more prevalent than ever, we are demonstrating why, keeping an eye on your loads isn’t really a ‘nice to have’ – it’s essential!”

Aart specified the use of Broadweigh load cells and Handheld Advanced to the project – both vital to making sure that there were no overloads on the lifting points of the truss structure. The BW-HA advanced wireless handheld brings an additional level of portability to the Broadweigh system by expanding its standalone monitoring capabilities. This device allows users to perform advanced operations with load shackle readings without the need for a PC and a base station. It can be configured into three operational modes;

Roaming inputs – working straight out of the box and showing the nearest shackles with the same radio settings. This is ideal for walking between different areas with the Handheld Advanced and picking up readings from all shackles independently of other monitoring systems.

Pre-defined inputs – up to 24 inputs can be configured separately, shackles can be named and have audible warning levels set.

Summing groups – shackles can be summed together, giving totals for a whole structure and individual trusses. The total can be ‘drilled down’ to allow viewing of individual shackle values.

In this instance, the installers needed a fast and simple way to see the loads being applied on each suspension point and the Handheld Advanced is the perfect tool as it allows for summing groups to be set up with a group overload value and an individual overload value per suspension point.”Once the entire project was completed, the load monitoring data was used in our risk analysis and documentation. The load cells were therefore only needed during the installation process.”

“The Handheld advanced really the perfect tool for the job. With the push of a button, it gives you complete insight about the load being suspended without the need of a computer or any in-depth knowledge of the system at all.”

Using a combination of 8 x Broadweigh 4.75 tonne loadcells, 1 x USB dongle antenna and 1 x Handheld Advanced, PSRIG was able to lift the large truss grid incorporating the light structure which was designed to suit the large scale of the atrium. This unique installation, functions as a data-driven ambient communicator, generating luminosity through light patterns, forming an abstract landscape with smooth movements linked to real-time meteorological data.

“Had we not used load monitoring, there is no way we would have been able to ensure the safety and longevity of our installation,” said Aart. “The significant risk is that, without knowing the loads, others will come along and hang heavier loads than those stated and agreed during the planning phase, or distribute the agreed upon load incorrectly. We have a client who is really pleased that we used accurate, effective and flexible equipment from Broadweigh. We as the installers were already convinced of the greatness of the Broadweigh wireless load monitoring systems so we are delighted that others are too.”

For more information about this article from BroadWeigh click here.