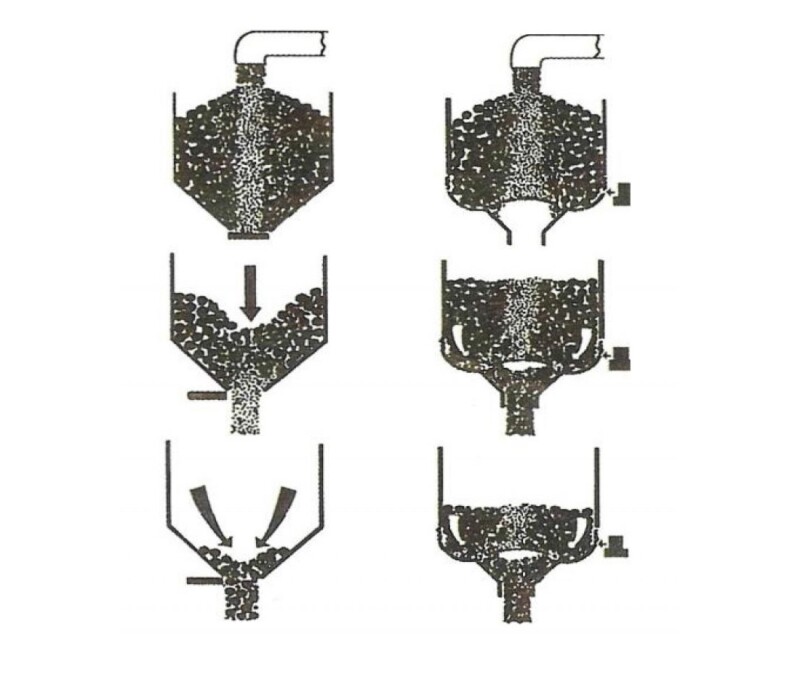 Vibra Screw Inc. (United States) - Recent field experience indicates that segregation of dry mixtures in bulk storage can be eliminated by proper application of vibration to the material in storage. As a result, food processors are adding vibrating bin activators to the bottom of hoppers and bins not only to induce flow, but also to eliminate segregation.

An Indiana miller, for example, cut deviations in composition of a bakery premix by one half. Included in the premix are flour, salt. sugar, soda and cornstarch.

Although these ingredients differ widely in density, particle size and flow characteristics, vibration helps keep composition at discharge very close to that at the inlet.

Eliminating segregation in dry mixes brings three principal benefits. First, better product quality can be maintained on a consistent basis. Second, downtime and lost production due to rejected batches or remixes, can be reduced. And finally, engineering management gains more flexibility in plant design and operation. Larger quantities can be bulk-stored because the risk of segregation no longer limits storage capacity. It is also possible to mix first and store later in instances where the risk of segregation might previously have ruled out this option. Such added flexibility can lead to improved production and important cost savings.

Picture what happens when you pour a mixture of stone and sand on the ground. A rough cone forms, with stones mainly around the outside and sand mainly in the center. The stones tend to roll down the surface of the cone as it is formed, while the sand sifts down closer to the center. Segregation has taken place.

If, as usually happens in a conventional storage bin, material discharges from the center of the bin first, finer material would emerge first and coarse material last.

The same basic thing happens in mixtures of dry ingredients having differing physical characteristics. Differences in particle size are the principle contributors to segregation. Differing flow characteristics and density may also influence the situation; however, the combination of a vibrating bin bottom with a built-in baffle over the final outlet substantially reduces the segregation problem.

Vibration keeps the material mobile and free-flowing, particularly at points of potential bridging, and the baffle directly over the outlet prevents material from emptying down a pipe in the middle first, and then off the walls as often occurs in static bins.

Because of the baffle. the pipe never gets a chance to form. Instead, the material draws evenly across the cross section. Moreover, the final discharge is a combination of materials from the center and those from nearer the walls. So even if there were segregation from the center out, there is re-mixing just before discharge. This flow pattern is called mass flow, or first-in, first-out flow.

Mass flow of bulk materials from a bin has been demonstrated in experiments in which layers of different-colored materials are loaded into a bin equipped with a bin activator, developed by Vibra Screw Inc.

Achievement of true mass flow from a bin eliminates risk of dead areas, spoilage and contamination among products processed on the same equipment.

The Indiana miller’s experience underscores most of these points. The plant produces dough for dinner rolls and sweet rolls. The basic operation is to blend the dry ingredients into a dry premix. It is stored in a pre-mix bin, and discharged at a controlled rate to a scale hopper, then to a mixer where wet ingredients are added and the dough is developed. The bin is 7-feet- diameter by 15-feet-high and holds more than 10,000 pounds.

Originally, all feeding and dispensing of dry ingredients were by gravity. But a disparity in physical properties of the dry ingredients led to segregation within the storage bin. Densities ranged from 38 to 75 pounds-per-cubic-foot. and particle sizes from 30 to 400 mesh. As a whole. the mixture has a density of 55 pounds-per-cubic-foot and a moisture content of 5 percent.

To minimize segregation, a 7-foot-diameter bin activator was installed on the premix bin.

Closer control also was maintained over the quantity of material stored in the bin. This kept retention time of material in the bin close to 50 minutes. The bin activator mounts to the bottom of the bin in place of the standard bin bottom. Special hangers isolate it vibrationally from the bin. A patented gyrator on the bin activator generates vibratory forces up to 6,000 pounds to vibrate the entire bin bottom and its contents, but not the bin itself. In addition, an integral dished baffle mounted horizontally in the bin activator above the outlet vibrates to induce mass flow from the bin. It also prevents packing at the outlet due to static head loads.

Result of the installation was immediate reduction in segregation. This company measures composition of the premix by monitoring pH of the dough after blending.

Too high a pH means excess alkaline ingredients such as soda. A low pH indicates that level of acidic ingredients, such as salt, is running too high.

In addition to improved quality control, the company reports that eliminating segregation improved line machinability of the product as it moves through the process. Based on this experience, it has installed another activator on a second process line.

In the static bin (left sequence) loaded with material of non-uniform particle size. A pipe forms down the center of the outlet. The vibration-assisted bin (right sequence) has a baffle over the outlets. Vibration keeps all material mobile. and the baffle prevents the pipe from forming.

For more information about this article from Vibra Screw Inc. click here.

Other articles from Vibra Screw Inc.. 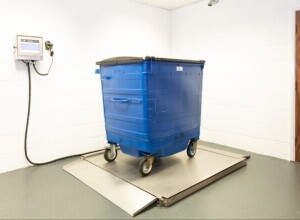 Article by Weightron Bilanciai Ltd: Weighing Your Plastic for the Plastic Packaging Tax